Cuba Under Embargo: the macro impact

Cuba - how can such a small isolated country survive a 50 year trade war against the world's greatest super-power?

And how could anyone possibly verify the economic claims of such a secretive regime?

Get the answers in this brief and readable tour that exposes Cuba's economy through the eyes of its Caribbean neighbors, as well as its global trading patterns.

Readable books designed to help you understand the state of your economy at the global, national, and personal levels

Industrial Shift: the structure of the new world economy

Palgrave-Macmillan has just published the latest book by Joe Atikian, INDUSTRIAL SHIFT.  Peer into some of the biggest trends in the global economy, whether you are a general reader or an economist. From the decline of manufacturing, to the rise of China, to jobs and the service sector in the age of outsourcing, you'll gain a stronger understanding of today's world and how it affects you.

Even in our turbulent global economy, the popular idea of declining farms and factories is largely unfounded. Food and manufacturing output are growing everywhere, but remain hidden by the faster-growing services sector. Engineers, programmers, surgeons, and pilots make up an ever increasing share of services - it's not just burger-flipping.

There is no doubt that industries are shifting, but how does it all add up? We usually hear the bad news from TV and newspapers, leaving us with stale ideas about what makes a healthy economy. INDUSTRIAL SHIFT provides a freshly updated view that counters our tired assumptions about off-shoring, low wages, and industrial decline.

Autonomous vehicles promise to be an entirely new and beneficial transportation technology that will disrupt the way people use cars, roads, and cities. They promise to be cleaner, safer, and more pleasant than the cars people drive today. But even after years of development, the technology remains mysterious, incomplete, and unreliable. It also brings economic and political implications.

Huge investments are being made on developing self-driving cars, but
significant risks are mounting too. The trouble is that an over-arching analysis is not readily available to a wide range of people who depend on such information to make informed decisions. Should they lean toward optimism or pessimism?

Consumers need to know which view to favor because they will live with
the product risk. Investors need to know because billions of dollars might be lost by car makers and VCs. The entire enterprise might collapse or disappoint.

This book raises the major issues surrounding the technologies needed to make fully autonomous vehicles a reality on the road. It addresses these issues by comparing them with similar developments in air and rail transport systems that have been working towards driverless systems for decades. It also dissects the unique technical problems faced by driverless cars on our existing multi-user roadways, and the ideas for solving them given by industry and other analysts.

Thank you for contacting us!
Go to Amazon.com 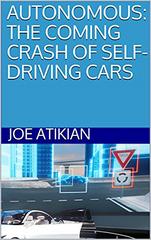 Submit your questions or comments here: